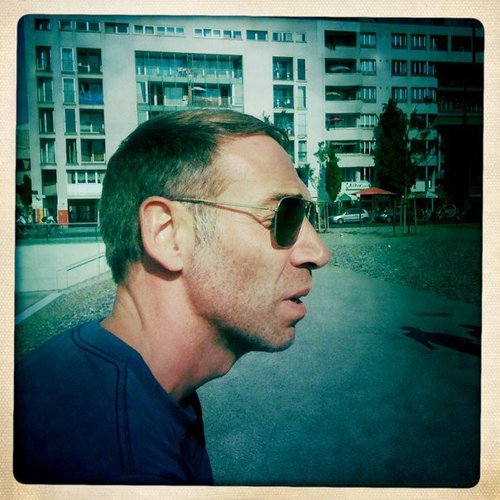 British. Born in London in 1970, Finn was raised in rural England.

B.A.(Hons) in Fine Art at U.W.E. Bristol and at Wolverhampton (to 1993). His early figurative work of this period had similarities to Stephen Conroy while his landscapes were expressive and highly coloured. With the rise of conceptual art, epitomized by the YBAs, around this time in England painting was deemed, if not dead, then certainly passé.

Returning to the UK and determined that his true métier was in the visual arts he gained a double First Class B.A. (Hons) in Illustration from Falmouth College of Art, Cornwall, UK. (1998-2001)

At The Royal College of Art, London he studied under Dan Fern, Brian Eno, John Stezaker and Andrzej Klimowski on the multi-disciplinary M.A. in Communication Art & Design (2002-04). He then moved to Barcelona in 2004 and his illustration career continued to flourish. He was included in Taschen’s Illustration Now, a survey of the best illustrators in the world reflecting the both the huge variety of commissions, in subject and application, and their place of publication.

After being invited by Pascal Johanssen (of Direktorenhaus) to exhibit non-commissioned artworks at Illustrative 07 Berlin-Paris in 2007 and beginning to tire of applying his abilities to another’s vision he began to place painting once more at the centre of his artistic practice in 2010 while continuing with illustration commissions.

Finn then moved to Brussels and in 2011 he held his first solo exhibition of his series of large scale animal ‘portraits’ in oil titled ‘Anima, Animus, Animal’ at Galerie Kilt.While there,  as a freelance consultant with Pulse Brands for Rumaila Oil, Iraq he completed a comprehensive survey of the vernacular architecture, society, history, environment and culture of the Basra region. Drawn from this research his recommendations for a holistic and integrated socio-cultural development of the built environment and toward the long term social planning were taken up by both Rumaila Oil and the for the Basra regional government (2011/13)

Returning to Spain he then applied this knowledge and his various abilities and designed Casona Granado an eight bedroom rural hotel in Andalusia (2013-2016). During this period he also completed and began to exhibit ‘The Immigrants’ a series of large-scale oils of the birds, plants and landscape of the Almeria region.While working studios in Andalusia and Barcelona he began a sequence of very large scale landscapes of the Anthropocene.

As a child Finn lived in (and on – an antique boat) the Norfolk Broads with his artist parents. A family friend was Andrew Lees – a founder of Friends of the Earth and he helped instil, from an early age, a lifelong ecological awareness and interest in the natural world. (Indeed his first drawings were of the birdlife of this area).

Over the course of two years what began with the working title ‘Carbon’ became a deep inquiry into how all landscape was now affected by human activity. Working solely with charcoal at a very large scale within an oval format (to mimic the ratio of human binocular vision) the series became what is now titled ‘The Tainted Sublime’. During this period the increased incidence of forest fires lead him to a perhaps inevitable conclusion: to begin with, the idea was to use the most basic materials; charcoal/carbon, to depict a world both made of and affected by the misuse of carbon, now the very source of this basic drawing material – burning trees, became both the source of the material and the subject.

Since late 2018 Finn has been collecting charcoal from various locations (with the help of agencies including the WWF for whom he created a campaign in 2019) affected by wild, forest and clearance fires and using this material to make work of those same regions. Under the aegis of a project he has entitled ‘Canopy’ he has begun to use funds raised by the sale of these artworks to restore, replant and primarily to fund land purchase protection via The Rainforest Trust.

Over the course of the last decade he has continued to develop the various series; Anima, Immigrants, Emigrants, Tainted Sublime, The Black Square and Canopy while allowing them to cross-pollinate.

His art practice has thus become one that is highly developed in both its technical and conceptual aspects. It has been a long, varied and enriching journey that has ultimately lead back to the point in time where it was indicated to him that to be a maker of images in paint on canvas was to be an anachronism, to a moment where the idea became paramount and began the period in which the term contemporary art meant a rejection and a disavowal of all that came before. This divergence lead to him taking a very circuitous route back to this point of departure and which has ultimately lead to a highly developed ability to seamlessly unify content with form, concept with execution and value with values.

Since 2020 Finn has been without a studio or permanent home and divides his time between Bristol and Andalucia. Despite this he continues to develop his work and indeed has executed some of his finest work to date