Friday, 9th November 2007, saw the  opening of the newest addition to Dublin’s Arts and Antiques Quarter.

Gallery Zozimus at 55/56 Francis Street, Dublin 8 opened its doors to the public. Officiating over the ceremony, in ebullient form, was Ms Nell McCafferty.

Nell, ever the storyteller, regaled the audience with tales of her experiences in purchasing “Vatican Council II” artworks and also, surrounded by the myriad colours in this art gallery, a challenging business at the best of times, was reminded of the comments of George Bernard Shaw, on hearing of the death of Michael Collins, to “hang up your brightest colours in his honour”. 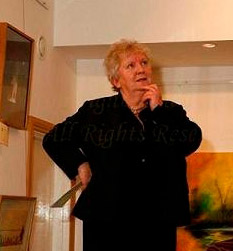 We have come a long way in the ten years since we opened Gallery Zozimus:

The name of the gallery relates to the famous blind ballad singer Michael Moran AKA Zozimus.

MICHAEL MORAN was born about 1794s, in the Liberties of Dublin, in Faddle Alley. A fortnight after birth he went stone blind from illness, and became “thereby a blessing to his parents, who were soon able to send him to rhyme and beg at street corners and at the bridges over the Liffey”. 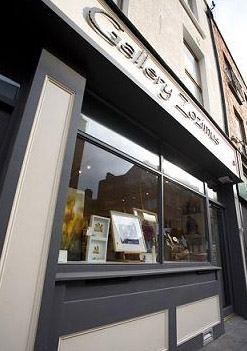 The best-known of his religious tales was St. Mary of Egypt, a long poem of exceeding solemnity, condensed from the much longer work of a certain Bishop Coyle. It told how a “fast woman of Egypt, Mary by name, followed pilgrims to Jerusalem for no good purpose, and then, turning penitent on finding herself withheld from entering the Temple by supernatural interference, fled to the desert and spent the remainder of her life in solitary penance. When at last she was at the point of death, God sent Bishop Zozimus to hear her confession, give her the last sacrament, and with the help of a lion, whom He sent also, dig her grave“.

The poem was so popular and so often called, for that Moran was soon nicknamed Zozimus, and by that name is he remembered.