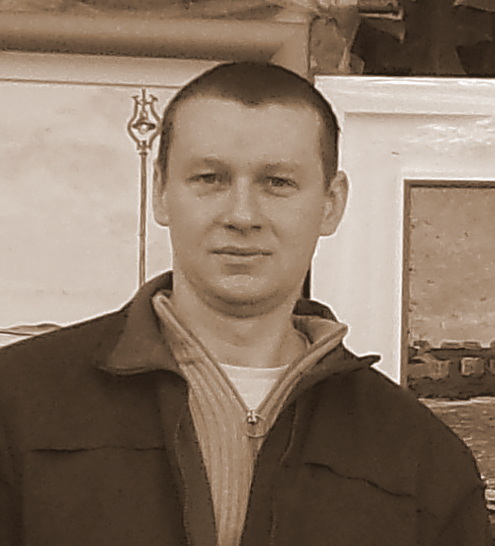 Born in the Ukraine in 1977, Andrii started drawing in early childhood and at age 10 he was given the opportunity to attend art school in Ivano-Frankivsk, Ukraine. Five years later after he received his diploma, he entered the Kosiv Institute (now College) of Applied and Decorative Arts where he specialized in Fine Arts and Leather Craft.

His first love was painting so he continued to paint and draw, recording daily life around him in the Ukraine.

He took part in a number of local exhibitions at this point in his life gaining valuable experience and recognition as an emerging talent, exhibited works in oils and water colour and some on leather, a medium with which he was experimenting.

On graduating from college Andrii wanted to expand his range of artistic disciplines and decided to try his hand at sculpture. This soon developed into a short parallel career move, sculpting portraits and other images on headstones. In 2000, in Kolomiya town, preparations were taking place for the international festival of Hutsul Folk, and Andrii was asked to oversee some of the restoration works of facades of buildings in the Centre of the town.

He enjoyed this brief encounter with sculpture however he found it quite limiting and soon he soon returned to his paintings working on a number of commissions.

Never one to sit still or remain in one artistic discipline for too long, Andrii, in 2000, completed some interior design work for an acquaintance. He liked the work and found that it allowed for a different sort of expression for his artistic talents. He was commissioned to work on private houses and apartments as well as commercial buildings such as restaurants etc. Among his interior design projects there was School of Milicia in Ivano-Frankivsk.

In 2009 Andrii was invited by a furniture firm “Edican” to take part in Kiev International Furniture Forum (KIFF 2009) where they received the award “For Creative Research”.

He eventually came back to painting, fine tuning his painting skills and has become adept in the Black canvas technique.

“I find that working on a black canvas helps me to express my feeling about what I am looking, at in a more meaningful fashion. There is a greater depth to the work, the light and dark shades become more intense. ” AT

To date Andrii has had two successful solo exhibitions in Gallery Zozimus, and his work is now in private collections throughout Ireland the UK and Europe.