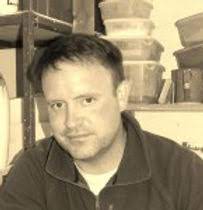 Born in Sligo on 01.04.1977, Ian first started working with clay in 1998 as a potter’s apprentice learning to glaze and fire all types of ceramics including Raku pottery.

In 2011, I set up my own studio in Sligo where I am now making and supplying a number of galleries throughout Ireland and the USA, for this I need to be extremely creative and artistic, a good problem solver. I do all my own marketing and product development, attending trade shows to generate new retail outlets and suppliers, while managing a small retail outlet.

Dragon Glaze is a mix of 2 glazes, the base glaze is a raku glaze that is altered to melt at a lower temperature to assist in the second process of the firing. The second is a unstable glaze that is normally considered problem or defect for most potters. Everyone of Ian’s pieces is a one of a kind work of art with enchanting surface texture, the technique Ian uses is often considered to be a glaze defect that should be avoided, however Ian has learned to use this so-called defect very effectively as an intentional decorative element.

“I don’t seek in perfection in each piece, in life nothing is ever perfect, if everything was perfect we could never progress or change, it is my flaws and mistakes that make me stronger, instead I appreciate the perfections in my quest for the perfect imperfection.” – Ian Carty

My influences have always been with Ancient Roman and Native American ceramics.
The artists made pottery to serve honour and worship by using techniques that have somehow long been forgotten. My aim is to recreate their work in a modern way.

Master potters from thousands of years ago never retained written records of how they made ceramics. The process was passed on as skills to their apprentices.
For thousands of years people were unable to ascertain just how they made their masterpieces. However, in the last few years “modern ceramicists” have spent long hours exploring the work and after many endeavors of both trial and error the process has been revealed to those who search for the answer in the clay.

Ian Carty works and lives in Co Sligo overlooking the great landscapes of BenBulben and the wild Atlantic from which he takes a lot of his inspiration.  His Bog series, depicting the quintessential Irish bog scene has proven extremely popular with collectors of his work as have his Horsehair raku pieces