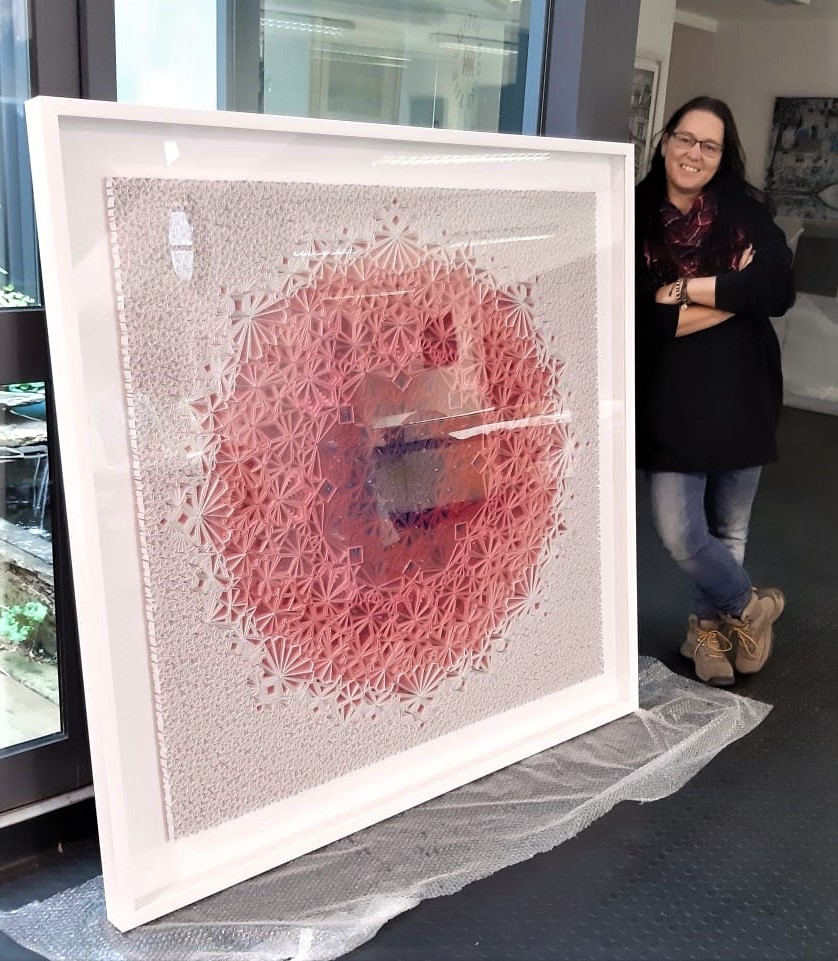 Miriam graduated as a Furniture Designer and was always inspired by geometry and mathematics, subjects which run strongly in her family. Miriam’s work, also known as Paper On Edge, is based on an old traditional technique of paper quilling. By combining this with her passion for mathematics and geometry, she introduces a whole new visual art language.

Each piece is based on a specific mathematical relationship, symmetry or sequence, and usually based on basic platonic shapes. To create each finished artwork she spends hours designing, cutting, folding and gluing paper, in order to achieve the required depth and movement. She approaches the process with a mixture of curiosity and precision. Some pieces are created intuitively, while others are pre-designed with every single cut carefully measured. Colours and textures are architectonically brought alive, fusing mathematics and art together.

Maths and art may not seem like obvious bedfellows but artist Miriam Fitzgerald Juskova has developed her own unique style based on her love of art, design and geometry.

Colourful and geometric prints have been used in art and design for time immemorial, however, the Slovakian native’s 3D artworks have found a novel way to combine geometry with techniques based on the ancient craft of paper quilling.

The resulting artworks are intricate, textured pieces with vibrant colour combinations that can light up a wall in your home.

The intersection of art and maths

With a father who used to paint and a mother and sister who both worked as maths teachers, it’s perhaps no surprise that these familial influences are reflected in Miriam’s work. The trained furniture designer has always gravitated to art that combines creativity, design and maths.

“It’s three-dimensional wall art that’s made entirely from paper,” says Miriam, when asked to describe her art. All the paper strips are hand-cut and folded into shapes that follow a certain mathematical order or geometrical pattern, using symmetry, rotation or sequence to bring those pieces together. What I want to achieve is movement. When you pass by it, you can see movement. From each angle, you can get different feelings or outcomes from the art piece. It’s based on a very old technique called paper quilling. Paper quilling is more about coils, curved shapes, and column shapes. I discovered that this technique helps me to express my love of geometry in a more artistic way.

Anyone who watched the film Mary, Queen of Scots will remember the scenes where Queen Elizabeth (Margot Robbie) curled long strips of paper to create intricate flower designs. Paper quilling has been around for at least 500 years but people like Miriam are bringing this traditional craft into the 21st Century.

Geometry and mandalas as art

As part of her work, Miriam has explored the traditions of sacred geometry, patterns in nature, and the concept that everything in life is organised – even if it appears chaotic. Many of her pieces are based on mandalas, which feature heavily in ancient cultures like Buddhism and are said to represent the cosmos. These spiritual or ritualistic designs are often used for meditation and Miriam’s work captures that sense of finding order in chaos.

“A lot of my work is based on geometry and mandalas. Even the mandalas themselves are based on shapes like a hexagon or a pentagon so there’s always a certain symmetry involved. Mandalas are mostly made by intuition. I would just dive in and go with the flow.”

When making mandalas, she starts out with a shape like a pentagon, heptagon or hexagon and works instinctively from there.

“When I start with a mandala, you have your colours chosen, your geometric shape, and then it’s basically just cutting shapes and going with the flow and using your intuition.

Although it’s an intuitive approach, it does require precision, measurement and detailed processes. Her larger pieces can take between 80 and 100 hours to complete.

Miriam met her Irish husband while they were both working in the US. The couple subsequently settled in Ireland, and Miriam combines her art career with raising three children and a day job.